The responses of Propel SNAP customers surveyed in November 2021 and recent data analyses reported by The New York Times underscore the precarious financial situation many low-income households face. This is even as temporary SNAP benefit boosts, monthly advance Child Tax Credit (CTC) payments, and other federal initiatives have helped mitigate household hardship and stimulate the economy during COVID-19. With some federal aid payments slated to sunset, the implications for policymakers are significant.

One in four SNAP households subscribe to Propel’s Providers app, which provides customers with information about their Electronic Benefit Transfer (EBT) card balances. During a December 8 FRAC webinar, Propel’s Julieta Cuellar explained topline findings from the survey of about 5,000 SNAP customers in November. For instance, a promising trend was that receipt of the October 2021 CTC payment again reduced food, housing, and financial insecurity among SNAP respondents.

Despite that piece of good news, the Propel survey, also identified worrisome trends, including

The Propel findings dovetail with those of J.P. Morgan Chase Institute’s “House Cash Balance Pulse: Family Edition,” which found that federal aid during COVID-19 improved low-income households’ financial circumstances but that any cushion is modest and short term. Even that financial cushion, however, could be narrower for Black and Latinx households and all households with children.

The scope and duration of federal aid during COVID-19 has economic ramifications. It is estimated that each $1 in SNAP benefits during a downturn generates between $1.50 and $1.80 in economic activity. As many working- and middle-class households exhaust “excess savings” as early as next year, a contrary and negative economic effect may result. Moody’s analysts warned The New York Times that the reduction in those households’ financial cushions could adversely affect the economy, “since consumer spending is such a large share of activity.”

1) The Senate should pass the Build Back Better Act (H.R. 5376), which, in addition to strengthening child nutrition programs , would continue to advance monthly CTC payments in 2022. 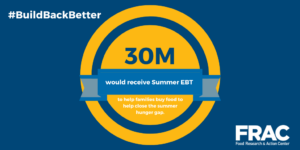 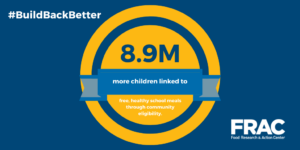 2) Congress should improve SNAP benefit adequacy further, including by passing the Close the Meal Gap Act (H.R. 4077/H.R. 2192) that would help more families with children afford to pay for both eating and heating.

Join FRAC in urging Senators to fight hunger by passing Build Back Better (H.R. 5376) as soon as possible, and urging Members of Congress to sponsor and pass the Close the Meal Gap Act (H.R. 4077/S. 2192).