In fiscal year 2019, the USDA-FNS reported that SNAP retailer redemptions approximated $56 billion. In their recently released fiscal year 2020 data, that number dramatically increased to $78 billion. The USDA-FNS attributes this 40% increase in redemptions to the emergency benefits provided in response to the COVID-19 pandemic.

While the additional emergency benefits no doubt contributed to the increase in SNAP retailer redemptions from the previous year, the six million new SNAP customers and 15% boost to benefits both likely contributed as well. 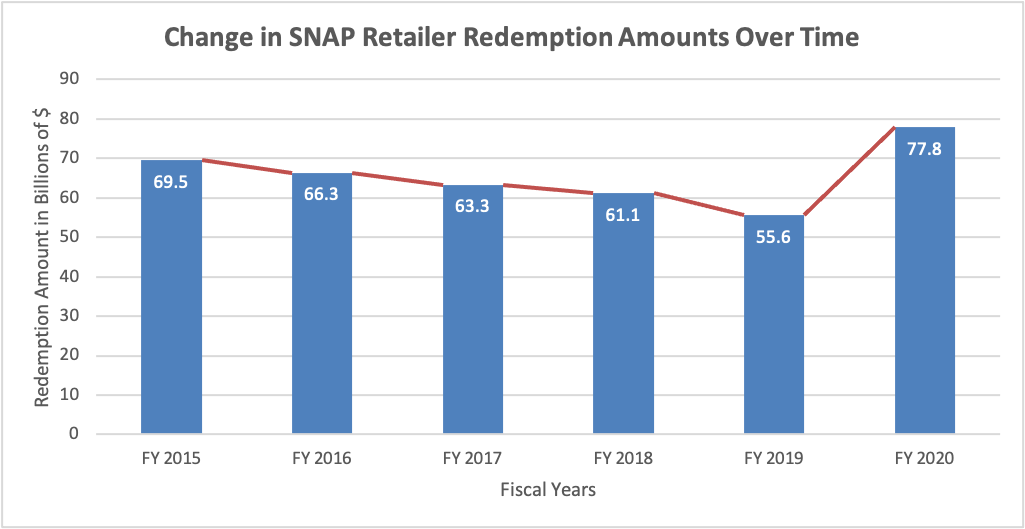 The USDA Economic Research Service (ERS) found that an average of $8.4 billion in SNAP and P-EBT benefits were redeemed monthly from April to September in 2020, an 86.4% increase when compared to the same six-month period in 2019.

The emergency SNAP benefits provided to individuals during the COVID-19 pandemic have more than made up for the declining SNAP retailer redemptions we have seen taking place since fiscal year 2015.

In November of 2019, roughly 37.4 million Americans were enrolled in SNAP. On February 3, 2020, the U.S. declared a public health emergency. With the closure of businesses and new guidelines around quarantining and social distancing, many individuals were left without a source of income while shortages of supplies led to increased expenditures due to price gouging. Between February and May of 2020, SNAP participation rose by almost six million individuals, or by sixteen percent.

The Consolidated Appropriations Act of 2021, signed on December 27, 2020, temporarily increased the maximum SNAP benefit allotment to 115% of the June 2020 value of the Thrifty Food Plan. The American Rescue Plan Act of 2021 extended this allotment through September of 2021. The 15% boost to SNAP averages to around $28 more per person, per month.

Emergency changes to SNAP have made an enormous contribution to the economy. We know that for every $1 billion in SNAP expenditures there is a roughly $1.7 billion increase in the United States’ GDP.

If we look at the dollar difference between fiscal year 2019 SNAP retailer redemptions with the fiscal year 2020 data, we see a $22 billion increase in FY 2020. When we consider the average 1.7x GDP multiplier, the increased SNAP redemptions in FY 2020 should have contributed to a $37.4 billion boost to the U.S. economy.

Individuals using SNAP shop in the same types of retailers that non-SNAP recipients shop in: supermarkets and superstores. These retailers combined account for over 82% of all SNAP benefits redeemed in fiscal year 2020, while making up only 15% of the total number of authorized SNAP retailers.  Online redemptions for SNAP saw a large increase, growing from $2.9 million in February 2020 to $196.3 million by September 2020.

While this information has not been disaggregated to indicate where these retailers are located (rural areas, urban areas, or somewhere in between), other research suggests that there is still a shortfall in the number of SNAP-approved retailers in rural or very rural communities. According to data published in 2012 by the Housing Assistance Council, the poverty rate for individuals living in rural communities is as much as 16.3% whereas the urban poverty rate is 17.3%. The rural poverty rate leaps to 28.7% when looking at only racial and ethnic minorities. Despite these high rates of poverty, SNAP-approved retailers can be nonexistent or inaccessible to impoverished individuals living in rural communities.

When more rural retailers apply for SNAP redemption authorization, SNAP customers in rural communities will have more markets to access and more places to spend their benefits. Retailers will have access to a steady consumer base and an equally consistent list of acceptable products on which to base their stock. This in turn supports both economic growth and stability, and a reduction in hunger in rural communities.