FRAC’s School Breakfast Scorecard released this week reveals that on an average school day in the 2016–2017 school year, 12.2 million low-income students participated in school breakfast, an increase of 0.6 percent compared to the prior school year. While participation has continued to increase, the rate of growth slowed, from an average of 390,000 additional students in each of the four preceding years to almost 70,000 additional students in the 2016–2017 school year.

This continued growth in participation — although slower than in previous years, likely because the economy is shrinking the number of low-income students — is due to more schools implementing breakfast after the bell programs and broad implementation of community eligibility, an option that allows free breakfast and lunch to be offered to all students in high-poverty schools. Breakfast after the bell programs move breakfast out of the school cafeteria, where it is served before the school day begins, and make breakfast more accessible and part of the regular school day for all students by offering breakfast in the classroom, from a cart or kiosk as a “grab and go” option, or via a second chance to eat breakfast later in the morning.

While this is progress, there are still many opportunities for growth. FRAC has set an ambitious, but achievable, goal of reaching 70 low-income students who qualify for free or reduced-price school breakfast for every 100 who eat school lunch. On an average school day in school year 2016–2017, 56.7 low-income children participated in the School Breakfast Program for every 100 who participated in the National School Lunch Program.

West Virginia and New Mexico exceeded FRAC’s goal in the 2016–2017 school year. Both of these states have maintained strong school breakfast participation among low-income children as a result of innovative state legislation that required all or some schools to offer breakfast after the bell. 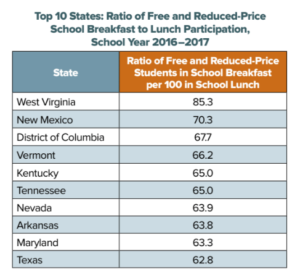 Notably, the six states with the highest school breakfast participation were among the top 15 states for the percentage of eligible schools participating in community eligibility. In the 2016–2017 school year, the third year of its nationwide availability, community eligibility allowed 20,751 schools and 3,538 school districts to serve free breakfast and lunch to more than 9.7 million children.

FRAC’s School Breakfast: Making it Work in Large School Districts, a companion report to the Scorecard, examines School Breakfast Program participation rates and trends in 75 of America’s largest school districts. Of the 75 school districts surveyed for this report, 22 achieved FRAC’s benchmark of serving 70 low-income children with school breakfast for every 100 receiving school lunch.

FRAC is committed to working with the U.S. Department of Agriculture, state agencies, advocates, and school districts to keep up the momentum and ensure all students start the day with a healthy breakfast.

During COVID-19, U.S. Department of Agriculture’s (USDA) Food and Nutrition Service (FNS) has had enhanced authority from Congress to grant state SNAP agencies greater flexibility on enrollment procedures. In new policy guidance, FNS has clarified that, even after the COVID-19 Public Health Emergency Declaration (PHE) and its enhanced authority ends, it can use its normal waiver authority to approve requests for continuation of some of those workarounds.