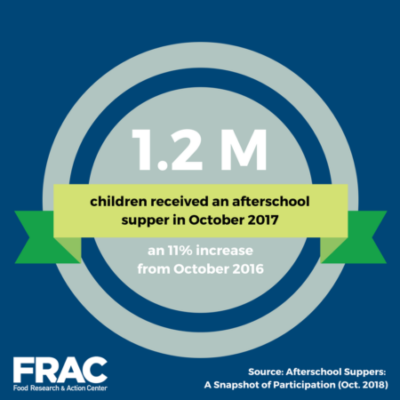 WASHINGTON, October 10, 2018 — More than 1.2 million children benefited from afterschool suppers on an average weekday in October 2017, an 11 percent increase from the previous year, according to the annual Afterschool Suppers: A Snapshot of Participation report, released today by the Food Research & Action Center (FRAC). The report analyzes participation data in the federal Afterschool Supper Program and Afterschool Snack Program, nationally and by state.

Despite an increase in participation from 2016, the report finds that only one child received an afterschool supper for every 19 low-income children who participated in the National School Lunch Program in October 2017.

Because afterschool suppers are a relatively new option — they first became available nationwide through the Healthy, Hunger-Free Kids Act of 2010 — every state has room to grow participation in the 2018–2019 school year and beyond.

The District of Columbia, California, and Vermont had the highest participation rates of children in the Afterschool Supper Program. D.C. exceeded FRAC’s goal for states to serve supper to at least 15 children for every 100 who participated in school lunch (21.7 to 100). And three states — Oklahoma, North Carolina, and Mississippi — increased the number of children participating in supper by more than 50 percent in October 2017 when compared to October 2016.

One barrier to better performance is the shortage of afterschool programs: demand for quality afterschool programming far outstrips the supply in low-income communities across the country. The largest federal funding source for afterschool educational and enrichment programming, the 21st Century Community Learning Centers program, supports afterschool funding for only 1.7 million children on an average school day. More public and private funding is needed to increase the number of high-quality, affordable afterschool programs.