School Breakfast Fuels Health and Learning for Millions of Children, Still More Need to be Reached 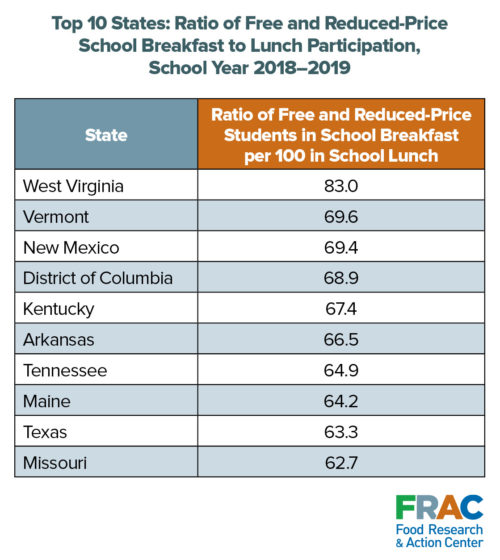 “We know that when breakfast is moved out of the cafeteria and served after the first bell, participation in the program increases and more children reap the benefits,” said Crystal FitzSimons, director of school and out-of-school time programs at FRAC. “The states that have made steady gains in participation among low-income children are those that have breakfast after the bell models in place, often combined with offering breakfast at no charge. We urge more states to promote this approach.”

West Virginia once again topped the Scorecard, with Vermont and New Mexico coming in second and third, respectively. West Virginia was the only state to meet (and exceed) FRAC’s goal for states to reach 70 low-income children with school breakfast for every 100 who ate school lunch, reaching 83 low-income students with school breakfast for every 100 who participated in school lunch.

Hawaii was the lowest-performing state on the Scorecard, serving breakfast to fewer than 39.3 low-income students for every 100 who participated in school lunch. An additional seven states — Iowa, Nebraska, New Hampshire, South Dakota, Utah, Washington, and Wyoming — failed to reach even half of the low-income students who ate school lunch in the 2018–2019 school year. These states fell way below the national average of 57.5 low-income children participating in school breakfast for every 100 who ate school lunch.

The Scorecard also details the high fiscal cost of low participation in the School Breakfast Program by including the amount of money that states left on the table in the 2018–2019 school year by not reaching more eligible children with school breakfast. The four largest states — California, Florida, New York, and Texas — would have collectively brought in an additional $300 million if they met FRAC’s 70-to-100 goal.

Today, FRAC also released School Breakfast: Making it Work in Large School Districts, a companion report to the Scorecard. Of the 76 large school districts surveyed for this report, 23 achieved FRAC’s benchmark of serving 70 low-income children with school breakfast for every 100 receiving school lunch. The top three school districts with the largest growth in school breakfast — Sioux City, Oklahoma City, and Detroit — implemented community eligibility in some or all of the district’s schools, and used breakfast after the bell service models in most of their schools.

School breakfast is one of the best ways to boost student achievement, reduce absenteeism, and improve student nutrition. Throughout it’s 50-year history, FRAC has worked to expand the reach of the School Breakfast Program. FRAC released its first Scorecard in 1992, which contributed to over 25 states passing legislation requiring schools with a high proportion of low-income students to serve breakfast.

Read the Scorecard and the Large School District reports.

For 50 years, the Food Research & Action Center has been the leading national nonprofit organization working to eradicate poverty-related hunger and undernutrition in the United States. Follow us on Twitter and Facebook.