What is the Impact of a $30-Per-Person Monthly Increase in SNAP Benefits?
In the new CBPP report, economists Patricia M. Anderson of Dartmouth College and Kristin F. Butcher of Wellesley College examined the impact of a $30-per-person increase in monthly SNAP benefits. Higher SNAP benefit levels were estimated to reduce food insecurity, increase grocery spending, improve the consumption of many nutritious foods (including vegetables and lean sources of protein), and reduce fast food consumption (see figure). These improvements in consumption are consistent with findings from in-depth interviews of SNAP participants who reported that they would buy more fruits, vegetables, and lean meat if their food budgets allowed. 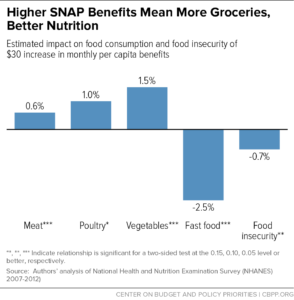 What are the Impacts on Health and Well-Being When SNAP Benefits are More Adequate?

The nation ran a large natural experiment involving higher SNAP benefits several years ago, and it worked. Average benefits starting in April 2009 reflected a temporary boost in allotments pursuant to the American Recovery Reinvestment Act (ARRA) of 2009. This increase was in recognition of the effective and quick stimulative effect of SNAP benefits on the economy as well as the recognition that hard-hit families needed additional assistance. Unfortunately, the temporary ARRA boost ended on November 1, 2013, and benefits were reduced for all SNAP participants.

Research on the ARRA boost and SNAP benefit adequacy, including the new CBPP study, demonstrates favorable impacts on food security, health, dietary intake, and food spending with an increase in benefits. This selection of studies focuses on the ARRA boost:

Why are SNAP Benefits Inadequate?
Researchers, advocates, and emergency food providers have been saying that SNAP benefits are inadequate for years, and in 2013, the prestigious Institute of Medicine, after a thorough study, outlined the factors that explain why the SNAP allotment is not enough to get most families through the month with a minimally adequate diet (e.g., the lag in SNAP benefits keeping up with inflation, the failure to fully account for shelter costs). An analysis by FRAC one year earlier found that SNAP benefits are inadequate, in part, because they are based on USDA’s impractical Thrifty Food Plan. The plan includes impractical lists of foods; lacks the variety called for in the Dietary Guidelines for Americans; unrealistically assumes adequate facilities and time for food preparation; unrealistically assumes food availability, affordability, and adequate transportation; particularly costs more than the SNAP allotment in many parts of the country; and ignores special dietary needs.

Improving SNAP benefit levels is an essential component of FRAC’s plan to end hunger, and a critical strategy for furthering SNAP’s role in improving food security, health, and well-being in the nation.