Home > Blog Posts > The Pandemic Disrupted a Decade-Long Decline in Food Insecurity in 2020, but Government Policy Has Been a Critical Support

The Pandemic Disrupted a Decade-Long Decline in Food Insecurity in 2020, but Government Policy Has Been a Critical Support

Over the last week, the U.S. Department of Agriculture (USDA) and the U.S. Census Bureau have released their respective annual reports on food insecurity and poverty in the United States.

From 2020 to 2021, the national rate of food insecurity, defined as trouble providing enough food for everyone in the household due to lack of resources, fell slightly from 10.5 to 10.2 percent (although the difference was not statistically significant). The Supplemental Poverty Measure (SPM), which accounts for local cost of living, taxes and refunds, and participation in government programs, fell significantly from 9.2 to 7.8 percent.

Figure 1: Rates of Food Insecurity Among Many Types of Households Was on a Decade-Long Decline Prior to the COVID-19 Pandemic 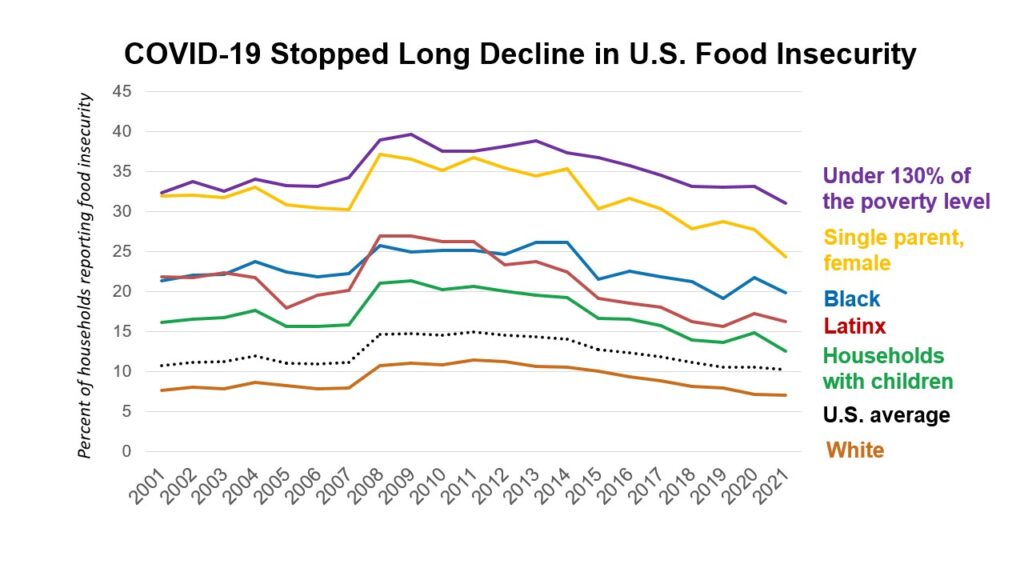 Since 2011, food insecurity had been on a slow and steady decline. This was true for virtually every racial and ethnic group and for different types of households, such as households with children. The pandemic disrupted this progress.

Disparities by race and ethnicity. Racial disparities in food insecurity increased from 2019 to 2020, which was reflective of how COVID-19 exacerbated long-standing structural inequities in income, employment, and health. From 2020 to 2021, these disparities were reduced, although they are still unacceptably high (see Table 1).

In addition to the federal nutrition programs, investments from the American Rescue Plan have made the recovery in employment more equitable than previous recoveries. From 2020 to 2021 SPM poverty rates fell:

Rates among adults over 65 years old living alone also increased significantly from 2020 to 2021 (from 8.3 to 9.5 percent), rising to their highest rate in 20 years. In addition, adults over 65 were the only group for whom SPM poverty rates increased from 2020 to 2021, from 9.5 to 10.7 percent. A larger share of these older adults are on fixed incomes that have not been keeping pace with inflation.

Policy Implications and Next Steps
Despite overall reductions in food insecurity from 2020 to 2021, far too many people still struggle with hunger. However, lessons learned from the pandemic prove that social programs work to reduce poverty and food insecurity.

Offering Healthy School Meals for All, P-EBT, and the Child Tax Credit proved to be a lifeline for families. Boosts to Supplemental Nutrition Assistance Program benefits and flexibilities to the Special Supplemental Nutrition Program for Women, Infants, and Children (WIC) have been critical to helping families put healthy food on the table.

Greater investments are needed in these programs. The White House Conference on Hunger, Nutrition, and Health on September 28 presents an important opportunity to build on those lessons and make ending hunger a national priority. Meanwhile, Congress must act quickly as time is running out to pass legislation that will ensure that critical child nutrition and WIC programs are improved, strengthened, and expanded so that all children receive the nutrition they so desperately need.