Report Finds More Low-Income Children Start Their Day With a Healthy School Breakfast; Too Many Still Missing Out 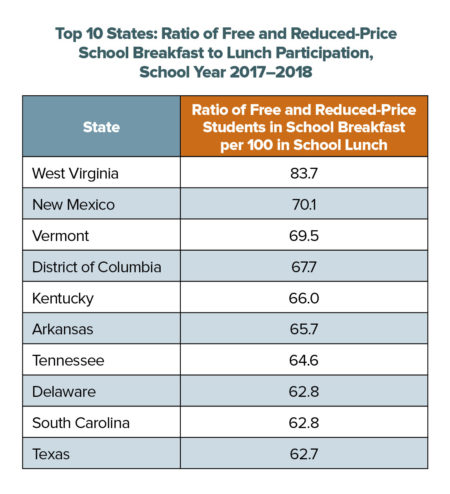 WASHINGTON, February 13, 2019 — More low-income children across the country are getting the nutrition they need to learn and thrive through the School Breakfast Program, according to the annual School Breakfast Scorecard, released today by the Food Research & Action Center (FRAC).

The report also reconfirms that when breakfast is moved out of the cafeteria and served after the first bell, participation increases and more children reap the benefits. New York’s large increase in the number of low-income students participating in school breakfast in school year 2017–2018 was largely driven by New York City’s rollout of a districtwide breakfast after the bell program and its implementation of community eligibility. More than 56,000 additional low-income students across the state ate school breakfast compared to the prior school year, the largest state increase in the number of students in the nation.

Utah remained the lowest-performing state on the Scorecard, serving breakfast to fewer than 40 low-income students for every 100 who participated in school lunch. Eight additional states — Hawaii, Illinois, Iowa, Nebraska, New Hampshire, South Dakota, Washington, and Wyoming — reached less than half of the low-income students who ate school lunch. These states fell way below the national average of 57 low-income children participating in school breakfast for every 100 who ate school lunch.

The Scorecard also details the high fiscal cost of low participation in the School Breakfast Program by including the amount of money that states left on the table in the 2017–2018 school year by not reaching more eligible children with school breakfast. Large states, such as California, Florida, and New York, would have collectively brought in an additional $255 million in federal resources had they met FRAC’s 70-to-100 goal.

“We commend the states and school districts that have implemented effective strategies to increase participation such as serving breakfast after the bell and offering breakfast at no charge to all students. We strongly encourage others to follow their lead,” said Weill.

Read the Scorecard and the Large School District reports.

The Food Research & Action Center’s (FRAC) Pandemic EBT: Recommendations for a Permanent Nationwide Summer EBT Program report released today identifies best practices to ensure that children have access to nutrition benefits during the summer, and shares quotes from families about how Summer Pandemic EBT (P-EBT) helped them put food on the table.

The Food Research & Action Center (FRAC) is deeply disappointed that critical child nutrition provisions were not included in the Inflation Reduction Act.