New Report Finds that More Americans, Particularly Children, are at Risk of Hunger 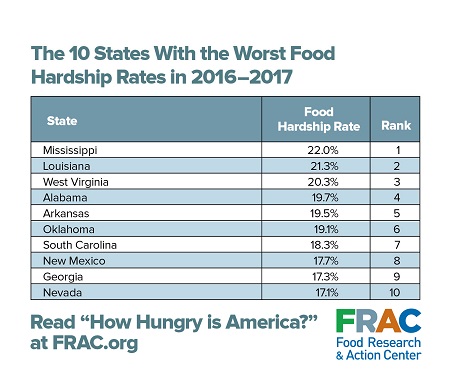 WASHINGTON, August 1, 2018 — In every part of the nation, a large number of households is experiencing food hardship — the inability to afford enough food for themselves and their families — according to a new report by the Food Research & Action Center. “How Hungry is America?” reveals that, after several years of decline, the national food hardship rate for all households increased from 15.1 percent in 2016 to 15.7 percent in 2017.

“While often hidden behind closed doors, food hardship is a serious national problem that requires a serious national response,” said Jim Weill, president, Food Research & Action Center. “Too many people in every region, state, and community have been left behind in the economic recovery from the Great Recession, and are still struggling to put food on the table.”

Although the nation’s unemployment rate continued to fall in 2017, wages were largely stagnant, and Congress and most states failed to provide needed initiatives to boost both wages and public programs for struggling individuals and families. In addition, the Trump Administration and the U.S. House of Representatives have attacked vital programs such as the Supplemental Nutrition Assistance Program (SNAP), school meals, and Medicaid. 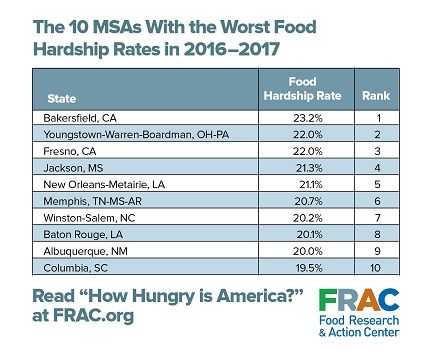 Mississippi had the highest food hardship rate among the states, at 22 percent — 1 in 5 households — reporting that they did not have enough money to buy food at some point in the past 12 months. In nearly half the states, 24 plus the District of Columbia, at least 1 in 7 respondent households (14.3 percent or more) reported food hardship. In 63 of 108 Metropolitan Statistical Areas surveyed, at least one in seven households said that affording enough food was a challenge.

“The high rates of food hardship underscore the need for Congress to pass a Farm Bill that protects and strengthens SNAP,” added Weill. “Otherwise, we will see worse health and hunger for struggling children, seniors, working families, and others across the country.”

About the report
How Hungry is America? contains data for the nation for 2017 and for every state and the District of Columbia, and 108 metropolitan statistical areas (MSA) for 2016–2017. The data were gathered as part of the Gallup-Sharecare Well-Being Index project, which has been interviewing hundreds of households daily since January 2008. FRAC analyzed responses to the question: “Have there been times in the past twelve months when you did not have enough money to buy food that you or your family needed?” A “yes” answer to this question is considered to signal that the household experienced food hardship. FRAC uses the phrase “food hardship” to avoid confusion with the annual Census Bureau/U.S. Department of Agriculture survey and analysis that produces “food insecurity” numbers, but the concepts are comparable.
Also see: Food Hardship August 2018 — Interactive Maps and Tables.

WASHINGTON, July 15, 2021 — Today, the Food Research & Action Center (FRAC) released its Food Insufficiency During COVID-19 Dashboard to illustrate how the pandemic has caused alarming spikes in hunger in America.

The Dashboard features up-to-date national and state-by-state data on reported food insufficiency rates, research on how the pandemic has exacerbated existing disparities in the access to food, and resources that show the connections between hunger, poverty, and health.

Hipp, a citizen of the Chickasaw Nation, will be the first Native American in this position if confirmed by the full Senate and will bring an important voice to underserved communities by ensuring the fair and equitable implementation of all USDA programs.

WASHINGTON, June 9, 2021 — The Biden administration’s action in withdrawing a Trump administration Supplemental Nutrition Assistance Program (SNAP) rule preserves SNAP benefits for more than 3 million people in low-income families working their way up the economic ladder and ensures a direct connection to free school meals for the children in their households.

In doing so, the Biden administration has listened to well over 150,000 individuals who had submitted comments in opposition to the proposed cut.