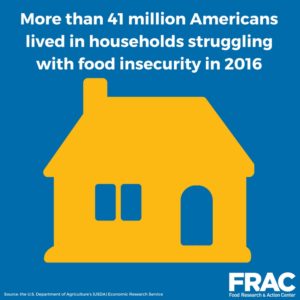 WASHINGTON, September 6, 2017 — More than 41 million Americans lived in households struggling with food insecurity — limited or uncertain access to enough food — in 2016, according to a report released today by the U.S. Department of Agriculture’s (USDA) Economic Research Service. The data reveal a small and not statistically significant decline in household food insecurity in 2016 from the previous year, with the rate dropping from 12.7 to 12.3 percent.

“While there has been progress since the peak of food insecurity driven by the recession — 14.9 percent in 2011 — it is much too little and much too slow,” said Jim Weill, president, Food Research & Action Center (FRAC).

“The federal government should be leading the way in addressing the fundamental problem of households struggling with hunger, but Congress and the president seem headed in the wrong direction,” said Weill. “SNAP and school meals have a proven track record in effectively addressing food insecurity. Without question, cuts to these programs would make food insecurity in this country far worse.”

Other key findings from the USDA report include:

The Food Research & Action Center is the leading national nonprofit organization working to eradicate poverty-related hunger and undernutrition in the United States. Read FRAC’s A Plan of Action to End Hunger in America.

About the USDA Report
The U.S. Department of Agriculture, using data from surveys conducted annually by the Census Bureau, has released estimates since 1995 of the number of people in households that are food insecure. Food-insecure households are those that are not able to afford an adequate diet at all times in the past 12 months. The report also includes food insecurity rates for each state, but for states, it uses three-year averages to give a better estimate of the number of households experiencing food insecurity.

WASHINGTON, February 7, 2023 — The Food Research & Action Center (FRAC) today announced it has been awarded a $2 million grant from the U.S. Department of Agriculture (USDA) to conduct and support research on expanding equitable access to the federally funded child nutrition programs.