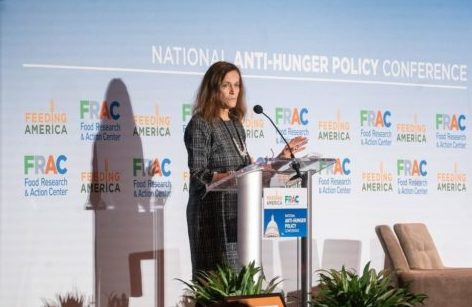 WASHINGTON, February 26, 2019 — The Food Research & Action Center (FRAC) awarded the Dr. Raymond Wheeler/Senator Paul Wellstone Anti-Hunger Advocacy Leadership Award to the Illinois Hunger Coalition and its executive director, Diane Doherty. The award was presented during the 2019 National Anti-Hunger Policy Conference, held in Washington, D.C. on February 24–26.  The conference brought together over 1,000 anti-hunger advocates, nutrition program providers, and policymakers from across the country for two days of networking and training to help attendees better fight hunger in their communities, followed by a day on Capitol Hill.

The Dr. Raymond Wheeler/Senator Paul Wellstone Anti-Hunger Advocacy Leadership Award is awarded each year by FRAC to an advocacy group and its leadership who have demonstrated outstanding leadership in the fight against hunger in America.

“Not only has Illinois Hunger Coalition’s work created positive change across Illinois, the organization and Diane also serve as role models for anti-hunger advocates throughout the nation,” said Jim Weill, president, Food Research & Action Center. “She and the dedicated staff at Illinois Hunger Coalition are helping to build a stronger anti-hunger and anti-poverty movement, and FRAC is proud to partner with them in the fight to end hunger.”

For more than 30 years, Illinois Hunger Coalition has advocated at the federal, state, and local levels for programs and policies that reduce hunger by increasing access to federal nutrition assistance programs for low-income Illinois residents.

“Without these programs and strong advocates like Illinois Hunger Coalition and Diane Doherty, hunger in Illinois and the U.S. would be far, far worse,” added Weill. “In Diane’s 19 years as executive director, her tireless efforts to protect and strengthen these programs have made her a national leader in the anti-hunger movement.”

About the Dr. Raymond Wheeler/ Senator Paul Wellstone Anti-Hunger Advocacy Leadership Award
Dr. Raymond Wheeler, an eminent Southern physician, was a pioneering champion of the fight against hunger, poverty and economic injustice. His findings in the late 1960s led to the publication of Hunger USA and a prime-time CBS documentary, “Hunger in America.” Dr. Wheeler’s efforts, both in North Carolina and on Capitol Hill, led to widespread recognition of hunger as a problem throughout America and to the expansion of the Food Stamp Program in the late 1960s. In recognition of his central role in fighting hunger through public policy, FRAC named this award after Dr. Wheeler in the 1980s.

The late Senator Paul Wellstone focused much of his extraordinary energy and commitment on eradicating hunger and poverty in America. Wellstone challenged the nation to stand up for children and challenged his colleagues to reject the stereotyping and misinformation about poor, hungry people in America. In recognition of Senator Wellstone’s passionate, eloquent and steadfast championing of the needs of poor people in this country, FRAC named this award after him as well as Dr. Wheeler.

The Food Research & Action Center’s (FRAC) Pandemic EBT: Recommendations for a Permanent Nationwide Summer EBT Program report released today identifies best practices to ensure that children have access to nutrition benefits during the summer, and shares quotes from families about how Summer Pandemic EBT (P-EBT) helped them put food on the table.

The Food Research & Action Center (FRAC) is deeply disappointed that critical child nutrition provisions were not included in the Inflation Reduction Act.