Annual Scorecard Reveals More Low-Income Children Start Their Day with a Healthy School Breakfast; Too Many Still Missing Out 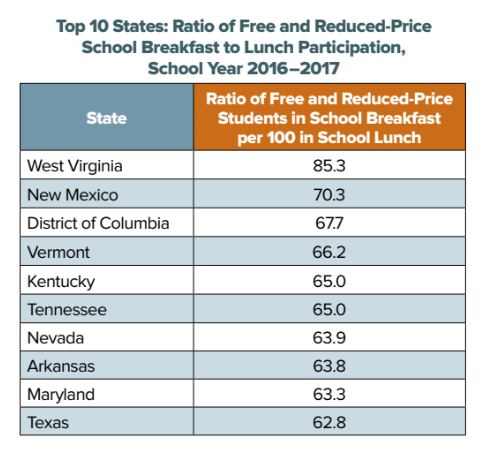 WASHINGTON, February 13, 2018 — More low-income children across the country are getting the nutrition they need to learn and thrive by participating in the School Breakfast Program, according to the annual School Breakfast Scorecard, released today by the Food Research & Action Center (FRAC).

On an average school day during the 2016–2017 school year, nearly 12.2 million low-income students participated in the national School Breakfast Program. While participation from year to year has continued to increase, the rate of growth has slowed, from an average of 390,000 additional students in each of the four preceding years to nearly 70,000 additional students in the 2016–2017 school year.

“The evidence is overwhelming that efforts to increase school breakfast participation pay off — less hunger, better test scores, and improved student health,” said Jim Weill, president, Food Research & Action Center.  “We commend the states and school districts that have implemented effective strategies to increase participation, such as serving breakfast after the bell and offering breakfast at no charge to all students in the school, and we strongly encourage others to follow their lead so that more children may benefit.”

The Scorecard ranks states and the District of Columbia on the basis of participation of low-income children in the School Breakfast Program. West Virginia topped the list, with New Mexico and the District of Columbia coming in second and third, respectively. West Virginia and New Mexico also exceeded FRAC’s goal for states of reaching 70 low-income children with school breakfast for every 100 who ate school lunch.

Nevada experienced the biggest increase in participation, going from 25th to seventh place among the states, largely due to state legislation enacted in the 2015–2016 school year that mandated high-poverty schools serve breakfast after the bell.

The Scorecard also details the amount of money that states left on the table by not reaching more eligible children with school breakfast. Large states, such as California, Florida, and New York, have the most to gain by meeting FRAC’s 70 to 100 goal. These three states would have collectively brought in an additional $237 million in federal resources had they met the goal.

Both reports highlight how community eligibility and alternative breakfast models  that move breakfast out of the cafeteria and after the first bell have been instrumental in increasing school breakfast participation. In the 2016–2017 school year, more than 20,000 schools and 3,500 school districts used community eligibility to offer school breakfast and lunch free of charge to more than 9.7 million students, an increase of 2,500 schools and 1.2 million children compared to the 2015-2016 school year. Offering breakfast after the start of the school day helps schools and students overcome common barriers such as late bus arrivals, tight household budgets, and the stigma associated with school breakfast as being only for low-income children.

WASHINGTON, November 21, 2022 — The Food Research & Action Center (FRAC) and more than 550 national, state, and local organizations working to end hunger signed a letter urging Congress to reinstate the expanded Child Tax Credit and Earned Income Tax Credit in any year-end tax package. The letter calls on Congress to revive these critical tax benefits as millions of families in the U.S. struggle against hunger and poverty.