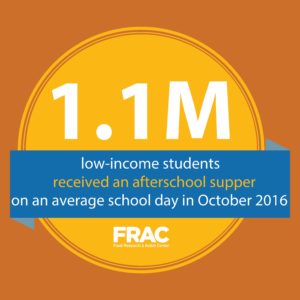 The report includes federally funded afterschool meals participation data nationally and for each state. Because afterschool suppers are a relatively new option that first became available nationwide through the Healthy, Hunger-Free Kids Act of 2010, every state has room to grow participation in the 2017–2018 school year and beyond.

“Afterschool suppers are a game-changer for reducing childhood hunger and drawing children into afterschool enrichment programs,” said Jim Weill, president, Food Research & Action Center. “One of the most effective ways to increase participation in afterschool suppers is to ensure that there are more programs that offer afterschool activities to the children who need them, and that those programs provide suppers.”

While national participation in the Afterschool Supper Program increased at an impressive rate from 2011–2015 — growing by approximately 200,000 children each year — growth slowed significantly in 2016. Only about 48,000 additional children received afterschool suppers in October 2016, compared to the previous October.

Overall, only one child for every 20 low-income children who participated in school lunch in October 2016 received an afterschool supper.

One barrier is that demand for quality afterschool programming far outstrips the supply in low-income communities, and more public funding is needed to increase the reach of afterschool programs. The largest federal funding source for afterschool educational and enrichment programming, the 21st Century Community Learning Centers program, is on the chopping block in the president’s fiscal year 2019 budget. If funding for this vital program were to be eliminated or reduced, it would have a direct negative domino effect on low-income children’s access to nutritious meals and snacks after school and during the summer.

“We will continue working with our national and state partners to advocate for the 21st Century Community Learning Centers program, and for the afterschool supper connection. Together they provide afterschool programs the resources necessary to ensure children have what they truly need after school: quality programs and nutritious meals,” said Weill.

WASHINGTON, November 21, 2022 — The Food Research & Action Center (FRAC) and more than 550 national, state, and local organizations working to end hunger signed a letter urging Congress to reinstate the expanded Child Tax Credit and Earned Income Tax Credit in any year-end tax package. The letter calls on Congress to revive these critical tax benefits as millions of families in the U.S. struggle against hunger and poverty.

WASHINGTON, November 18, 2022 — The Food Research & Action Center (FRAC) congratulates Nancy Pelosi on a historic tenure as Speaker of the House and celebrates her unwavering commitment to end hunger in America.